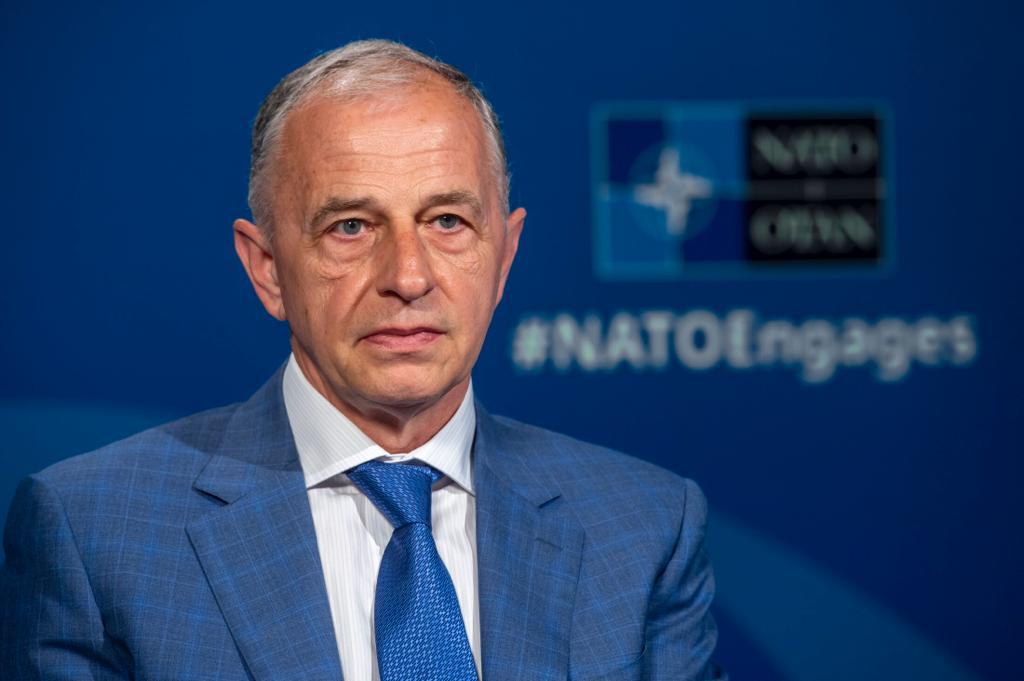 On 29 March 2004, I stood alongside Foreign Minister Dimitrij Rupel, as the Romanian and Slovenian flags were raised at the NATO headquarters in Brussels, together with those of our friends and neighbours Bulgaria, Estonia, Latvia, Lithuania, and Slovakia. Speaking then as the Foreign Minister of Romania, I described the accession of our new democracies to the world’s most successful Alliance as a major victory for those who had suffered the tyranny of authoritarianism, and a triumph for peace and freedom in Europe. Our journey, and indeed history, did not end on that day. It was just beginning. Today, the echoes of authoritarianism are stronger than at any time in the last two decades, the rulesbased international order is facing unprecedented pressure, and Europe is still not yet fully whole and free. So we must never take our freedom and democracy for granted. We must fight for them every day.

NATO: the bedrock of our security

This is precisely what NATO has been doing for more than seven decades, based on our shared values and our rock-solid commitment to defend each other, one for all and all for one. From 12 founding Allies in 1949, we have grown to a family of 30 free nations, uniting two continents and one bilion people across the Atlantic in a unique partnership of peace and prosperity. This unbreakable bond between Europe and North America ended forty years of Cold War, and helped spread freedom and democracy to Central and Eastern Europe. It stopped the bloodshed in the Western Balkans in the 1990s, and it brought NATO Allies shoulder-to-shoulder in solidarity when terrorism shook our nations on and after 9/11. Today, our security environment is more complex and contested than ever before. The geopolitical landscape is shifting once again, with a more aggressive Russia, and China’s arrival as a global economic and military power. The threats to our security are multiplying, from emerging and disruptive technologies to increasingly sophisticated cyber-attacks, from nuclear proliferation to the rise of brutal terrorist networks, and from the existential challenge of climate change to all-encompassing global health pandemics. The very definition of our security is changing. The lines between military and civilian, state and non-state, peace and war are increasingly blurred. A more diverse range of actors are operating in a “grey-zone” well below the threshold of an armed attack. They are attempting to challenge and chip away at the military and technological edge that has kept us safe for decades. More than this, potential adversaries seek to strike at the very heart of our free and democratic societies, by undermining our values, dividing our citizenry, and advancing an alternative, authoritarian model, based on bullying, coercion, disregard for international law, and unprecedented levels of state surveillance and the persecution of minorities. In these changing and challenging times, it is even more important that Europe and North America stand together in NATO, to ensure our shared security and assert our cherished values, of freedom, democracy, human dignity, and the rule of law.

Ally Since that March day in 2004, Slovenia has proved a worthy NATO Ally. Slovenian troops serve in our multinational battlegroup in Latvia, shoring up the eastern part of the Alliance against a more assertive Russia. Slovenia is one of the top contributors to our KFOR peacekeeping mission in Kosovo, promoting peace and stability in the Western Balkans. During the pandemic, Slovenia sent medical supplies to NATO’s newest member North Macedonia and to our partner Bosnia and Herzegovina. NATO Allies in return sent medical equipment and staff, and NATO’s strategic airlift capacity transported much-needed supplies to Slovenia.

Alongside its NATO Allies and partners, Slovenia participates in a number of multinational high-visibility projects. These include initiatives to jointly procure and manage munitions, command special forces operations, and train the next generation of special operations forces aviation crews. NATO provides air-policing to keep the skies above Slovenia and the Western Balkans safe. Just as NATO can rely on Slovenia, Slovenia can rely on NATO. Together we are stronger and more than the sum of our parts. And I am delighted that Slovenia has made strengthening Transatlantic relations and NATO-EU cooperation a cornerstone of its EU Council presidency.

Thanks to the personal commitment of NATO Secretary General Jens Stoltenberg, and our close and constant contacts with our counterparts in the European institutions, NATO-EU cooperation has reached unprecedented levels in recent years. We work together on a wide range of issues, on 74 common areas to be precise. This June, Secretary General Stoltenberg and High Representative Borrell published the sixth annual progress report on NATO-EU cooperation, which demonstrates that our political and practical cooperation delivers in deeds and not just words. We are stepping up to combat a range of cyber and hybrid attacks, including the deluge of disinformation we witnessed during the Covid-19 pandemic. We collaborate on exercises, like NATO’s largest annual cyber defence exercise, Cyber Coalition, in which the EU participated. We coordinate our support to our partners, to promote stability in our shared neighbourhood, from Afghanistan and Ukraine, to the Western Balkans. We have also tackled the refugee and migrant crisis together in the Mediterranean and the Aegean Sea. We cooperate on projects to improve military mobility, enabling troops and equipment to move more easily across Europe, and to develop new capabilities to address critical shortfalls, for example, in strategic airlift, air-to-air refuelling, and medical evacuation NATO and the European Union are natural and indispensable partners. We share 21 member countries, and more than 90% of EU citizens also live in a NATO country. Moreover, we share a common history and geography, we believe in the same values, and we face the same challenges. Our roles and remits are different, but complementary. Neither of us has all of the tools to respond to a changing world, but together Europe and North America represent half of the world’s economic and military might. Together we can be a formidable force for good. As we look to a more uncertain future, we must consider how to maximise our relative strengths and avoid duplication. That is why we welcome EU efforts to increase cooperation on defence, with the fullest possible involvement of non-EU Allies, in a way that complements and does not compete with NATO. A European Union that spends more on defence, invests in modern capabilities, and reduces the fragmentation of the European defence industry makes us all stronger and safer, and it contributes to a better sharing of the burden within NATO for our collective defence.

At our Brussels Summit in June, NATO leaders set out a bold new vision for our future security, through our NATO 2030 agenda. It will ensure that our Alliance remains fit for the challenges of today and future-proof against any threat tomorrow. We will continue to strengthen NATO militarily as the cornerstone of our collective defence, and by using it more as the unique political platform bringing Europe and North America together, to consult sooner on a wider range of issues affecting our security. We will also continue to adapt to a changing world, by accelerating Transatlantic innovation, strengthening the resilience of our societies, tackling threats in space and cyber space, and managing to the security impacts of climate change. We will strengthen our training and capacity-building support for partners in areas like counterterrorism, crisis management and defence reform. We will deepen our existing partnerships and seek new relationships with countries around the world that share our values to strengthen the rulesbased international order. We will underpin our efforts with an increase in NATO’s common funding and a new Strategic Concept in time for our next Summit in Spain in 2022. The Brussels Summit declaration underscores the importance of the NATO-EU partnership and sets a new level of ambition for our cooperation, in areas like resilience, new technologies, space and climate change. Slovenia’s EU Council presidency will have an important part to play in this work. Strengthening the strategic partnership between NATO and the EU is paramount to keeping us safe in a world of growing global competition and increasingly complex threats and challenges. With the new US administration we have a unique opportunity to cement the vital bond between Europe and North America, and ensure that we can continue to ensure our mutual peace and prosperity in a more uncertain world. Together with Slovenia and the other NATO Allies, I look forward to taking this important work forward.